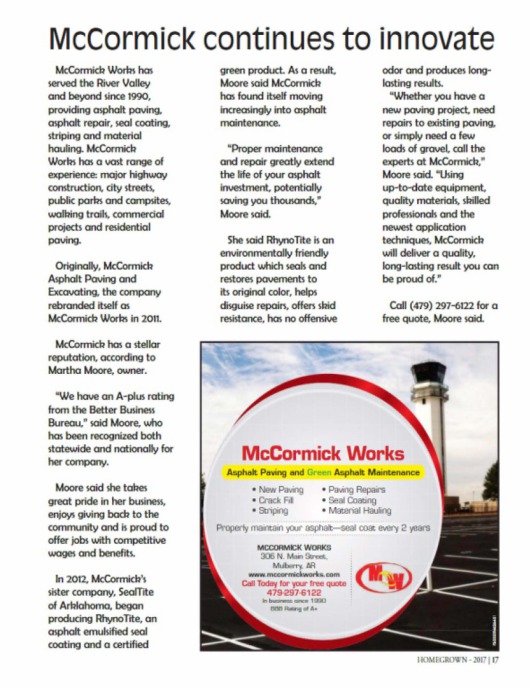 Pavement Maintenance and Reconstruction, the leading magazine serving contractors in the paving, seal coating, pavement marking, pavement repair and sweeping industries, has selected McCormick as one of the nation's top contractors of 2015. McCormick Works was chosen for meeting a set of criteria including gross sales volume for 2014, breakdown of the work the generated those sales and third-party verification of the sales total.

AY's annual Powerful Women feature is a designation awarded to 12 Arkansas women in recognition of their talents, tenacity and commitment to their communities and our state. The term "powerful" does not refer to a financial standing, but to the impact these individuals make in their chosen fields. Our Power Women-- as well as the Powerful Men who will be honored in June-- are nominated anonymously by their peers, past nominees, government officials, business leaders and community members.

Women's Foundation of Arkansas Power of the Purse Luncheon 2013:

2013 Woman Business Leader of the Year

The Women's Foundation of Arkansas has established this award to recognize a woman in Arkansas who has shaped the success of her organization/business and demonstrated leadership, professional achievement and contributed not only to her workplace, but also her community. Nominees are welcomed from across the state.

Martha Moore is owner and President of McCormick Works located in Ozark, AR. Growing up in the small town of Altus, Arkansas, Martha experienced first-hand the dire need for change in our economy and country. As a member of the first Mexican-American family in her town, she grew up with a passionate ambition to overcome poverty, to rise to challenges and achieve her life-long dreams. Martha slowly worked her way up in the company her father, Edward McCormick, started in the 1980's; from steamroller operator to secretary to office manager and ultimately buying the company piece by piece until she was 100 percent owner. Martha is now approaching her 22nd year of business, which alone is cause for celebration in these tough economic times. She has built strong relationships with many men and women in the industry, and has a well-supported and solid reputation for her company.

Published eight times per year, Pavement Maintenance & Reconstruction is the leading magazine serving contractors in the paving, sealcoating, pavement marking and sweeping industries by providing "how to" information to help contractors run their businesses more effectively and profitably.

The Spectator in Northwest Arkansas on May 2nd, 2012:

The Small Business Person of the Year award is based on an extensive evaluation and selection criteria that includes staying power, growth of business, an increase in sales or unit volume, response to adversity, innovation of products and services, and contributions to community-oriented projects. The first place award went to a team of colleagues from Arkansas Power Electronics, International (APEI).

Martha said of the award, “I was extremely honored to be considered. I believe that all of the hard work it takes to sustain a business in this tough economy is well worth it. For over 20 years now I have been producing a quality job for my customers. I am now looking forward to the continuous growth of my company in the general contracting industry.”

U.S. Senator John Boozman endorsed Martha by saying, “With over 20 years of expertise and experience in your field, you have made a big impact, and this award is just one way we can thank you for all that you’ve done.”
The awards luncheon took place at the 2012 Arkansas Procurement Opportunities Conference & Expo hosted by the State Chamber of Commerce and Associated Industries of Arkansas. The conference is held to improve the general economy of Arkansas by assisting businesses in obtaining contracts from federal, state and local governments, as well as from prime contractors and the private sector.